I just had the most unpleasant experience dealing with a buyer on EBay. I’ve been buying on EBay for several years now but have only recently started selling. I decided to clean out my closets and thus make room for new things and in so doing, found opportunities to offer my gently used things to others. I am only selling the nicest of the things that I can do without, while the other no longer needed ones will be given to various charity bins. My philosophy is to be as honest as possible showing any marks, scraps or signs of wear and in some cases, make the decision not to even sell an item if there is any serious usage. Thus, the items I’m selling are in very good to excellent condition. So the stage is set. 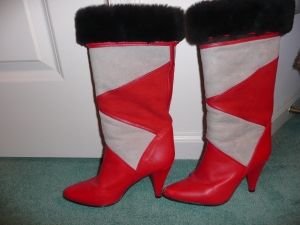 I decided to sell a pair of beautiful red leather and suede shearling-lined boots for a fraction of their original cost. After several tries, a woman from one of the northern states bid and won the auction. I was happy to see the email notification of the sale come in. Then I waited for the payment. In my excitement, I prepared the package, being careful to include a packing slip and even buying the postage. Oh my, I realized that I was doing all this and she hadn’t paid yet so I waited until the morning. Surely, she’d pay by then. I sent an invoice according to what I learned from the EBay selling tutorial. No response. A couple days went by and still no response from her and no payment.

I began to check her feedback ratings and there were several negative ratings over the last year. In addition, I found that several people had not paid for her things as she had an EBay store herself. Wow, it hit me. Could it be possible that she just wanted to give me a hard time because she was frustrated that others had done the same to her? How nasty can one be? Doesn’t she know about the Law of Attraction? What one does sends out energy and attracts the same into their own lives. By being nasty, she was attracting buyers that were nasty. Now I understood. She liked being paid on-time but didn’t get it that it wasn’t ok to not pay others on time. “Pay me on time, but I can do what I want to you”. What thinking!

So I had to open an unpaid item case. Several days went by. I wondered what would happen. Luckily, the money for the boots was inconsequential to my lifestyle or to me paying my bills. It just hurt me that someone would be so nasty when I go out of my way to do the right thing for others. I had to void the postage and just wait.

After just short of a week, I received a notice that the case was being closed because she finally paid for the item. Apparently, she really wanted the boots, didn’t want the bad mark that an unpaid item would eventually mar her EBay record, but I still don’t know what she’ll do once she gets the boots. I have a 14 day money back policy in effect on this item. I’m convinced that she was “playing me”. What a shame. I only sent her an invoice and no nasty grams. I hope that this is the end of the story for the universe will take care of her; there is nothing else for me to do. She will bring her own reprisal. It’s such a shame really. Meanwhile, I redid the postage, took the package to the post office to make sure I had proper tracking and now I wait. We’ll see how it goes from here. Let’s all put positive energy on it! Meanwhile, be nice since the energy of being nice will come back to you!