When it’s time for a pet to go

How much life is enough?

When deciding when to let a beloved pet go, one must consider their quality of life over one’s own feelings. This is an extremely difficult thing to do and a trial on which I was tested this past weekend.

For nearly two-months my dear cat Hercules was battling with chronic renal failure including anemia, dementia, possibly tumors and a host of other ailments. We would get one of his major issues under control and then another would pop up. He was on fluids for the renal failure which I learned to administer. Then his red blood cell count took a nose dive and thrice weekly shots were required. He needed four different medications twice daily and some natural remedies which I found to be helpful. All this I learned to deliver in as reasonable manner as possible, partly through trial and error. Which meds could be taken together and given in one syringe? Which ones tasted funny thus requiring a bit of ground up food be mixed in to camouflage the taste? I experimented until I had worked out a program that took about 2 hours in the morning and about 1.5 hours in the evening. 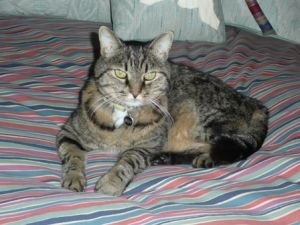 I curtailed my own activities to make sure I was home in time to do the evening medical program, including having my birthday dinner at 4pm so that I could be available. I didn’t mind taking care of my little darling. After all, for nearly 17 years he’d given me love, companionship, and reminded me when it was time to go to bed and often woke me in the morning. “Mommy, get up and feed me.” “Mommy, pet me.” “Mommy put food in my bowl.” Often, I’ve hear him outside my home letting me know he wanted to come in and then he’d cry to tell me he wanted to go outside. He was a great communicator. Unfortunately, once he got sick, he lost his voice. Or perhaps, he was too weak to use it.

When the time comes:

During one of our several emergency room visits, the attending veterinary technician gave me some advice. Having just put her dog down, she said in response to my question of, how do you know when it’s the right time? “When there are more bad days than good ones.”  Then she added, “Be sure to pick a good day.”  Her words kept ringing in my head. I was evaluating my pet’s life. Was his situation bad enough to end his life?

When yet another crisis occurred over the weekend, I had to face the reality. The pattern of problems was a sign of the inevitable. It was like putting one’s finger in the dam. Eventually, it wouldn’t hold the flood of water back. Hercules loved me so much that he was stoically dealing with the needles, the meds being popped in my mouth, the forced feedings because he knew I was grieving. I was crying so much. I didn’t want to let go.

There’s a sense among pet owners that one more intervention will get the pet over the mountain and on the other side with renewed strength and vigor. And, sometimes the new medicine or protocol does buy weeks or months of life. But for my Hercules, the non-stop care bought him 7 weeks of added life. However, I realized that he had no real quality in that life. Sure, he was alive. He could walk down the stairs, but no longer up (his heart wouldn’t take it). He could lie in the sun at the foot of the stairs, which he enjoyed. However, I had to watch him constantly or he would end up in the lower level just sitting on the bathroom mat since he couldn’t walk back up again. Sometimes he’d eat on his own, and sometimes I had to force him. He hated being force fed.

Then there was the dementia. He could have a can of food sitting right in front of him and he wouldn’t realize it. I had to constantly put the food under his nose and then he would eat some. This meant that I had to be there or he wouldn’t eat. If I had to go out of the house for a few hours, it would be hours that he wasn’t eating. So my schedule totally revolved around him. When did he need his fluids? When did he need to eat? I didn’t mind caring for him, but it was limiting for me. He was my baby and I loved him. That said, I finally had to let go. God had given this little angel to me and it was time for me to love him enough to stand back and let him go to his peace.

I had a talk with him over the weekend and we agreed. It would be Tuesday when his regular vet came back to the animal hospital. Somehow he must have known, since we had a wonderful day together. He ate more, seemed more like his old self and slept under the covers with me. But I agonized over the decision right up to the last moment. At the vet’s, I was crying horribly. Then a sense of calm came over me. Hercules and I knew it was the time. We both were ready. The vet gave him an anesthesia and within seconds he put his little head down and that was it. He was out. The vet told me he was ready. He was at peace.

My little darling Hercules passed at 4:25 pm April 5. I stayed with him for about 20 minutes until I realized the body on the table was no longer Hercules. He was gone to Rainbow Bridge to wait for me. Upon coming home I I lit a candle to celebrate his life and said prayers. May God’s light shine on him forever. And so it is. Amen.

Here is the poem about Rainbow Bridge:

Just this side of the Rainbow Bridge there is a land of meadows,
hills, valleys with lush green grass

When a beloved pet dies, the pet goes to this special place
There is always food and water and warm spring weather

They are not with their special person who loved them on Earth
So each day they run and play until the day comes
when one suddenly stops playing and looks up !

The nose twitches !
The ears are up !
The eyes are staring !
And this one suddenly runs from the group !

You have been seen, and when you and your special friend meet,
you take him or her into your arms and embrace
your face is kissed again and again,
and you look once more into the eyes of your trusting pet

Then you cross the Rainbow Bridge together, never again to be separated

This entry was posted on Friday, April 8th, 2011 at 2:38 pm and is filed under Caregiving, loss of a pet, Spirituality, The Circle of Life - A Journey Through Grief to Understanding, universal principles. You can follow any responses to this entry through the RSS 2.0 feed. You can leave a response, or trackback from your own site.