Simple Things Can Be Fun

We take so many things for granted. Sometimes even the simplest things in life can be really fun. This is an article about how we can miss the simple things in our quest for the Holy Grail – that is, for the big things we think are more important.

On my recent trip to Brussels, Belgium I had the opportunity to ride the train to Ghent. For the locals, taking a train is no big deal. For me, each step of the journey was a jigsaw puzzle requiring a complex analysis to figure out and once completed, a sense of accomplished was attained. Anyone looking at me must have been amazed at how much joy I was getting out of successfully procuring my 18 Euro roundtrip ticket to Ghent and then actually finding the right train track, correct car, and then a seat. Each piece of the puzzle coming together to accomplish the first task – get on the train! I sat there so pleased with myself! Others must have wondered why I was smiling to myself. I was so happy to just be able to figure that much out.

Honestly, it’s really not that complicated; it’s just when it’s a different country and you have no idea where a place is, the concept of first or second class seat in a special car and many trains travelling on a single track the whole thing becomes more complex. Where I live in Washington, DC there are rarely more than one train travelling on the track at a time. And if there is, I find it difficult to tell which train is arriving. Now multiply this by very many trains going to ever so many places all on each track and going in either direction, one must decide, and quite quickly I might add to jump on the train. Trains are on time and everything moves very quickly. One cannot stare at the trains and wonder too long. People are jumping on with or without luggage, and it’s important to get on and find a seat; unless it’s a reserved spot. Whew! So, again, I was quite pleased with myself.

I had briefly checked out spots to investigate once in Ghent. I was in Brussels for the Tango Festival and had completed the 5 days of the program having danced my legs off. I was sufficiently tired and could hardly get up the morning of my trip to Ghent, yet, I was determined to ride the train! Ghent was a good destination, being less than an hour and easy to maneuver, or so I was told. However, when one is on foot, getting around can be a project.

Then there was the issue of which station to disembark. One of the websites indicated one station while fellow travelers informed me that no, in fact it was better to get off at a different station. So I complied with the advice. After disembarking at the station, the next piece of the puzzle was to get to the downtown or centreville. There were many trams running on tracks to take people here and there. I had no idea which was the one I should take and. I became a bit panicky until one of the attendants indicated that I could buy an all-day tram pass inside the station. I was really having trouble buying the tram ticket from the machine outside. There might be a button to push to get English, but I had no idea of how to get there. Even for a bit more money it was worth it to me to get the all-day pass so that I’d know that I could get on the tram to get back to the station. It was only 7 Euros, so not a lot of money.

Once back inside the station I waiting in the line to buy the all-day tram pass and with a bit of explaining was successful in procuring it. Yeah, step two completed! Then I went outside once again and looked for Tram No. 1 that would take me into town. Now I had to make sure I was going in the right direction. The Tram was packed with people on this unusually warm Tuesday afternoon in June as I watched the landscape change from the station through winding streets to the centreville. Just that little trip was a bit of a sightseeing experience. It all was a wonder to me.

Upon arrival in the actual center of Ghent, I disembarked and realized that the main sights I had in mind to see where nearby. I headed towards the canal and walked along as many tourists were doing. I really felt like I was in Disneyland except this was a real place. The United States is only a couple hundred years old but this area of Europe dates back many centuries; this charming town had cathedrals, churches, and other types of buildings dating back to the 15th century. It was definitely a walk back in time. I loved it all! What a joyous day, totally alone with no one to talk to but happy within myself.

Once I understood how the streets followed the canal I felt safe that I wouldn’t get lost and began to wander around looking at this place or that for several hours. Of particular note was the Castle, called Gravenstein of which I took the audio tour. Whoever wrote the script was a real comedian and listening to the voice describing stories of the goings on in the castle during its history made me laugh. I must have been a sight myself walking around laughing to myself. One fun story credited this Castle as having the first fireplace.

When I got tired, I found my way back along the canal, like Goldilocks with her breadcrumbs, took the Tram No. 1 in the opposite direction to return to the station. Within minutes the train came to Brussels. The train system in Belgium is amazingly efficient and very fast! I never waited more than a few minutes for a metro or train even on Sunday.

I arrived back at my hotel about 9pm very tired and ate a salad that I’d put away in the room frig happy that I didn’t have to find some place to eat. Sometimes it’s just nice to go into the kitchen and get something to eat and not have to go out. As this was a hotel, the next best thing was to keep food in the frig for one of my meals.

All in all, I’d had a very good day filled with simple activities, yet quite satisfying. I appreciated not getting lost, all the people along the way that had said a word or two of guidance, and especially those that could speak English! Sometimes the best things are very simple! As always, comments are welcome.

The Importance of Helping Hands (Reaching the Top Of Machu Pichu)

Peru was an amazing trip for lots of reasons. First, I had wanted to go for years but was concerned about the altitude, the local conditions (how poor the country is with the resultant possibility of crime), and pre-conceptions about my physical limitations. The website played down the amount of walking and the fact that the one mile treks were up, up, up! Granted I had been doing walks around the lake near where I live, but 45-minute casual strolls don’t compare to climbing knee-high steps at Machu Pichu for an hour to reach the top summit in time for a sunrise ceremony! So in addition to strenuous hiking on the edge of a mountain, we were doing it before day-break in dim light. On June 20, the day before the June Solstice, I made it to the top fairly well. It was a spectacular sunrise. 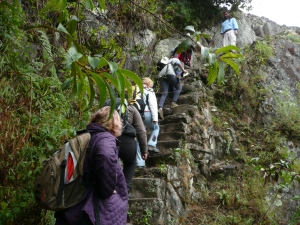 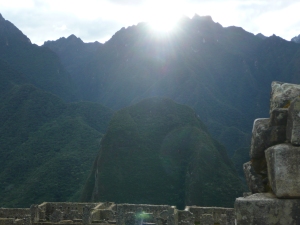 But once we had done some ceremony to welcome the sun, gone back down part way to use the bathroom facilities and then gone back up again, my legs were really starting to hurt. By the afternoon, my thighs were almost paralyzed with pain making each step more and more difficult. Then, to my pleasant surprise, I began to see hands in front of my face as my much younger fellow travelers began to turn around to lend a helping hand. With each step, as I struggled to move upward, I suddenly started to feel that I was aided by divine helpers, some present and some not visible. Spirits now uplifted, my steps were lightened as I felt that I not only had physical help but angelic help as well. A smile spread on my face. Positive self talk replaced the menacing thoughts of, “What if I can’t make it, how will I ever get back down alone?” Now my mind was filled with, “Yes, I can do this, with a little help from my friends.”

Overcoming the Fear of Change

There is an expression that the only thing to fear to fear itself. Us humans like things that become routine and simple (at least many of us do). We become complacent in our every day world and are happiest when things settle down and simplify. Why fix it if it isn’t broken? Sometimes we stay in relationships past the point when they need changing. They can be with spouses, with friends or with businesses. Today, I’m addressing the latter. It’s often difficult to establish a good working relationship with our business partners – the dentist, doctor, cleaners, tailor, etc. and alot easier to just stay with the same individuals or organizations than to change even when their customer service starts to go south.

But, the divine plan is perfect in all ways. Sometimes we are lead to make changes even when it’s not comfortable. This can happen particularly when it’s in our best interest. Lately, I’ve had a few issues with my dentist’s office not respecting my personal situation. They called and canceled appointments due to problems in their office just before their vacation, cutting me off from end of year/or end of period benefits. I let it go the first time but was in a real pickle the second time.

The situation was such that I had to schedule with a different dentist. The particular work had to be scheduled as I was going to lose my benefits by the end of the month and they were going on vacation. I quickly checked my plan’s on-line provider listing, found a dental office within 3 miles and made an appointment. Wow, how fast it was! Then I wondered why I had been so reticent to change earlier. The next day I went to the new office and the staff was terrific. And, this new office turned out to be less expensive so my out of pocket expense was even less than expected. I was totally satisfied. After leaving the new office, I quietly thanked the universe for guiding me to a quality, reasonably priced and close in dentist that could adequately serve my needs.

Why had I been so afraid to change? Now I feel more open about other changes in my life. Once we start changing in one area and it goes well, we feel free to make changes in other areas. I wonder what will come next? There’s nothing to fear for the universe supports me in all that I say and do!